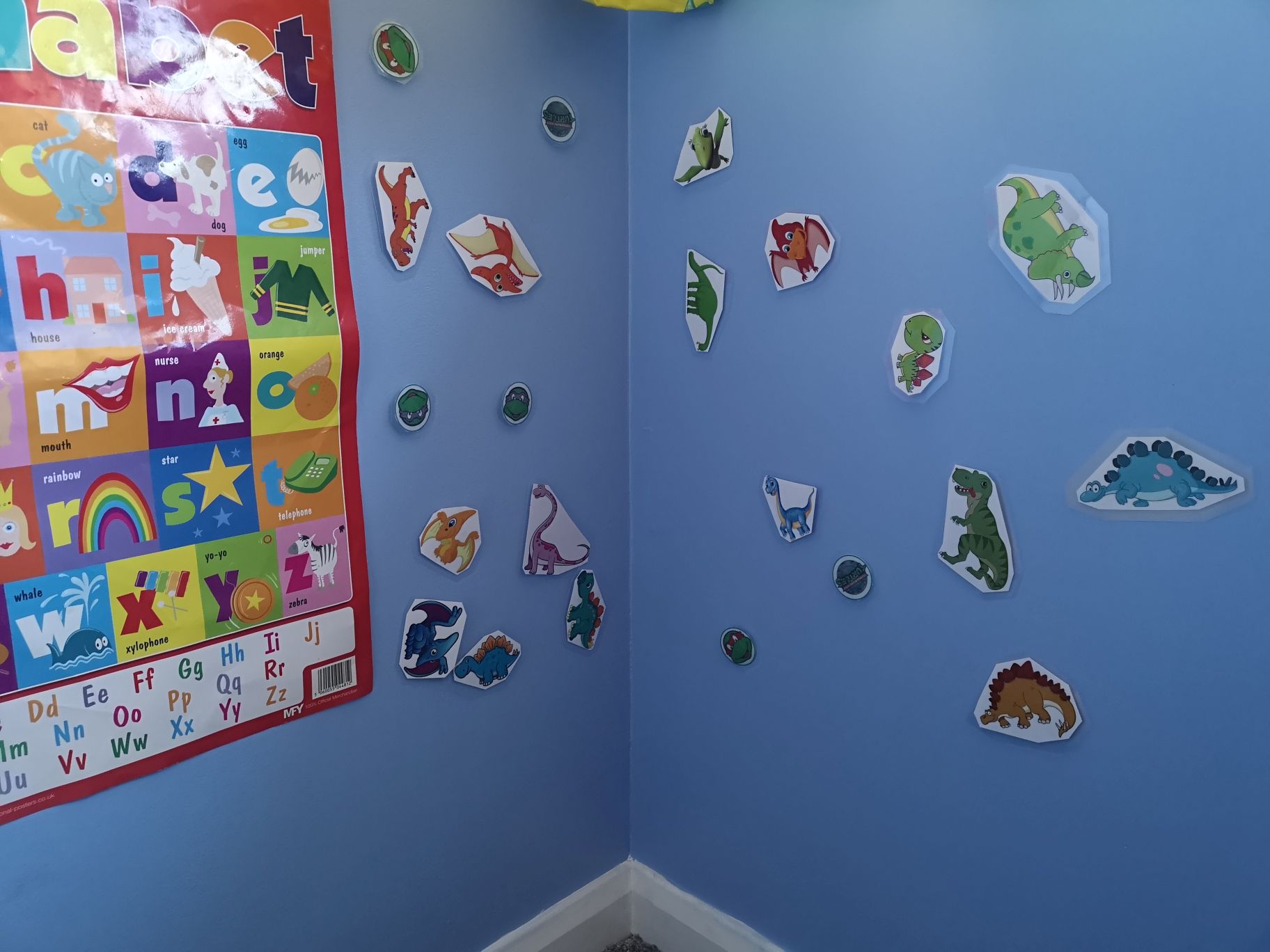 A fun (and cheap) homemade game for your toddler, which doubles as a nice little decorative corner for their room. Sticky dinosaur cards for the wall!

Having a hyperactive little toddler, who loves to help and learn new things, means I’m always trying to come up with new fun activities. In this post, I’ll show you how I made a really great (and cheap) game which even doubles as a nice little decorative corner of his room. Sticky dinosaur cards for the wall!

One of the best things I’ve bought is a laminator. I got mine from the Amazon warehouse deals for 12 quid. I have used it to do all sorts of arts and crafts.

Ok so first you need to find the right category. What does your little one like? Animals? Cars? Planes? A particular cartoon? You can choose any category, as long as it’s something they’re excited about. We went with Dinosaurs. So I have started teaching him the names of particular dinosaurs… I’m not really very knowledgeable on the subject, I have been teaching myself as we go along. I started with the dinosaurs we see most often in his favourite cartoons, books we read each night as well as the ones we see most often in the places we go like the safari park’s living dinosaur exhibit.

Dinosaurs he knows so far:

I then googled each dinosaur, but I went with the cartoon versions. I let Kal help choose which ones he liked, he loves browsing pictures of his favourite things. I found this to be the most fun part of this activity. He’ll sit on my lap and point to the pictures he likes, for me to click and enlarge. We then discuss what he likes about each one. We do this a lot actually, it is a nice bonding experience, we have fun together, he learns about using technology (in this case he learns that not every screen is a touchscreen as I tend to do this on my desktop as opposed to the tablet), he learns to use the mouse and is learning about a new topic like dinosaurs and what they look like.

The nice thing is that while you’re browsing the pictures, you can also veer off a little and learn new things by browsing together. I find that when he asks me a question I don’t know the answer to, I say to him “I don’t know buddy, but let’s google the answer together”. This may seem like a trivial thing, but I find it’s good for them to know that you might not always know all the answers, but you have the means to find them.

Anyway, we then chose a few pictures of each type of dinosaur and saved these images to my PC. After you’ve chosen a fair few, insert each saved picture into a Word document then just space them out, that way you save paper. You don’t have to, you can of course just print each picture directly. I prefer saving them to Word because I can then control the general size of each dinosaur printed out.

After this, I had Kal help with the cutting… I printed a couple of extra sheets so that he could cut a few himself. He’s pretty good at cutting, but while he busied himself with his little plastic toddler scissors, I proceeded to laminate the duplicated sheets.

Once laminated, cut out each dinosaur. I went with relatively straight cuts along each dinosaur, making each one an abstract shape. You can cut it any way you like. Now it’s time to ready your double sided velcro tape. Cut lots of little pieces and stick one side at the back of each dinosaur. Then use the other side of the velcro and stick it to the wall. I chose a corner in his room dedicated to this. Don’t forget to not go too high so little hands can reach. I chose a corner, but mostly just because he’s all out of wall space. You can choose any spot anywhere in the house for it.

Keep in mind the velcro tape can be quite strong and removing it will probably damage the paint a little. If you’re like me, you have a lot of messy fun at home and don’t mind so much about touching up a bit of paint once a year or so, or whenever it’s needed. I highly recommend doing this, it’s been up for months now and he plays with it often. One day when we want to remove it, it’ll be easy enough to just paint over any little bits where needed.

Alternatively, you could always create a board specifically for this, if you’d rather not use the wall. You could either buy some sturdy cardboard or just cut up some used card box boxes and create a type of board. The advantage is that you can move it or hang it on a wall.

Now you finally have all your dinosaurs, ready to go up on the wall (or board). So at this point, Kal was jumping up and down with excitement so I let him stick the dinosaurs to the wall. I showed him the first one and he proceeded to do them all. He loves to take each one down, name each dinosaur and then at the end put them all back again. It’s also helped him practice lining up pictures, so they aren’t upside down, and match the two pieces of velcro from the picture to the wall. A good little exercise for his little fingers and his hand-eye coordination. He has become very good at lining them up properly, all the right side up.

Of course, it isn’t absolutely necessary to use the laminator and you could use sellotape instead of the velcro tape. But that would make for a temporary, limited amount of fun. The advantage of laminating the pictures obviously is that they won’t break or tear and when used with the velcro tape, you can stick and unstick the dinosaurs as often as you want.

I found this to have been a great activity for us. It was fun when we made it, as you can really get them involved. Made for a great bonding experience. It was also good practice for his crafting skills and the end result was just fantastic. Not only is it a nifty little game which has already offered hours of entertainment, well maybe not hours as of yet but he does still sometimes stop in that corner and do a round of taking each dinosaur off the wall and putting them back again, but I think it is a lovely little decor addition to his room.

I plan to do another set like this sometime soon. I’m not 100% sure what type to go for next. I am tempted to just do more dinosaurs, as he learns more species, but I do think a space one would be brilliant. Perhaps start teaching him the planets and find accurately scaled templates so he can learn their names and their positions. Other types could be animals you see at your nearest zoo or farm, it doesn’t have to be limited to only the animals at the places that they usually go to, I just think it would be nice to do something that they can relate to, a place they have been to or go to sometimes. Types of vehicles. Colours and shapes. Characters from a favourite cartoon show or movie. I did a backdrop for his birthday party recently, which came out surprisingly well, some velcro characters would make for a great interactive game! Maybe I’ll try that next. 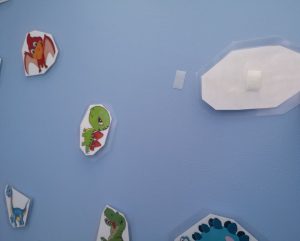 Let me know if you’ve tried this, how did it turn out? I’d love to hear some ideas for the types of things you used in your creations and of course how your little ones enjoyed it too.

Don’t forget to come back if you’re looking for another game for your toddler, I’m always trying to come up with new ways to entertain them! Why not check out DIY Play Sand & Messy Play post for another fun-filled activity.

5 thoughts on “Sticky Dinosaur Game for Your Toddler”