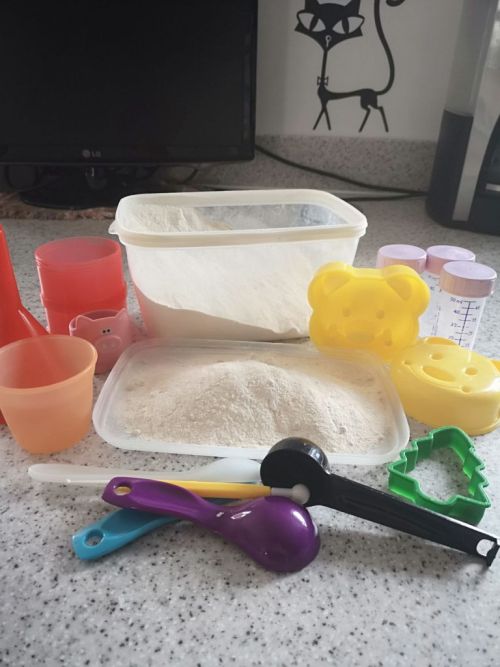 A guide to try messy play at home. A fun and exciting activity for any toddler to enjoy sensory exploration.

When Kal was still in the I like to shove everything in my mouth phase, I took him to messy play. I found a class, recommended by a friend and we went once a week for about a month. It wasn’t great. I mean it was nice enough, the lady who ran the class was friendly and helpful but a bit disorganized and I did miss out on a class I paid for due to her poor planning. That on its own wouldn’t be so bad but there was one session where she had cake in one of the trays, which I didn’t think was great. It was also not the only time there were inedible things for them, one session had shaving foam. Now shaving foam, as much fun as it may be to play with, is probably not a great thing to put out for under ones to play with. This is where Kal had his first taste of cake, much to my disgust, as he was only about 4 or 5 months old at the time!

I then decided to try messy play at home. He did enjoy the whole experience and I don’t mind mess at home, so I ventured to try this myself not long after. I started with spaghetti hoops. I placed a large plastic tablecloth on the kitchen floor, found a couple of large trays (I didn’t really have many trays, I improvised using his high chair tray instead) and opened up a few tins of spaghetti hoops. I also used the Angel Delight pudding packets, followed the directions and made some yummy flavoured puddings. It was a big hit, he loved playing with it, he explored the textures, the great splashing it made when he excitedly splashed about and of course the taste. He didn’t discover right away that you could eat it, after a bit of time playing he started shovelling spaghetti hoops into his mouth as if he hadn’t eaten in a week!

It was a successful first attempt. I really wanted to keep going with messy play, I think it’s a great experience for curious little minds and hands, it helps them nurture their imagination and curiosity. 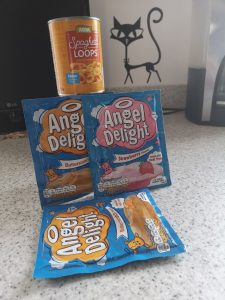 There are a few things I’ve experimented with which found to be really good. Try some of these on their own, or group them together, either way, it’s sure fun to be had with your little ones! Here’s a list for good and fun materials for those still too young to not shovel everything into their mouths and which you’ll probably find in your cupboards already:

The peanut butter was particularly fun to watch!

As he got older and stopped trying to eat everything (this happened around 8 months or so), I upped his sensory play experience with things like:

This is one of my personal favourites, we have used it many times, Kal calls it his play dough, as the first time we played with flour, I told him I was making play dough… it went horribly wrong though and I ended up using loads more flour to try to salvage it but it was just goo. We ended up outside, with him absolutely covered in flour.

Just mix together some flour and brown sugar. The more sugar, the browner and more coarse the texture, emulating actual play sand. It’s a good way to enjoy all the benefits of playing with sand, but with no worry of them eating mouthfuls of sand. I usually get a bunch of utensils out of my kitchen drawers for him to enjoy the play sand, baking utensils, measuring spoons and cups, containers, even bowls and cups will do. It’s a good way for him to do pretend cooking and baking, which he really enjoys. Throw in some cookie cutters too!

I find this a good activity for keeping them entertained while you’re trying to make dinner, as I tend to sit him at the breakfast counter so I can still play with him while I prepare dinner or do the dishes, or whatever else you need to try to find time during the day! It’s also been great for his imagination, helping him pretend play but is also good for exploring shapes, colours, opening and closing and just general fun. I try to teach him the names of everything he’s playing with, we count them, we go over their colours and if they have a shape we go over that too.

I also let him help me when I’m cooking, this is the start of helping him find his way around a kitchen. Give him the freedom to explore and gain his confidence and teach him the basics, so that one day he’ll be a self-sufficient man who can cook and look after himself. And as an added bonus, I get a little helper in the kitchen! He already helps me load the dishwasher and feed the cats. It may seem silly to think that, just from letting him play with some flour and a few utensils, but I find it’s best to start from the beginning. Growing up, I had a family that believed kids were seen and not heard. You played on your own, either in your room or if visiting your gran’s house, in the corner behind the couch, quietly. You were quiet, you never made a fuss and you played with your toys. I was never allowed in the kitchen. I was never asked to do any cleaning. Living with a group of woman who were OCD about cleaning, meant you could never make the tiniest bit of mess and they were the only ones who would do the cleaning because it had to be perfectly done. And one day I was suddenly 16 and told what a terrible kid I was because I wasn’t helping with anything at home and then left on my own to figure out how things like a washing machine worked. At least this way I know that he’ll be used to doing things around the house, helping and pulling his own weight. And most importantly, he’s learning and having fun at the same time! 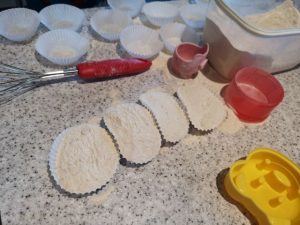 I was finishing off this post as Kal and his little buddy were having breakfast. When he was done he came over and peeked at my screen. After about 2 minutes he went into the kitchen and got the flour out of the cupboard. He comes to me saying; “Mummy cake flowers. Happy birthday to you. Happy birthday to you.” He ended up making cupcakes 🙂 He said he had made a cake for everybody, even one for nursery.

Don’t forget to come back if you’re looking for another game for your toddler, I’m always trying to come up with new ways to entertain them! Why not check out Sticky Dinosaur Game for Your Toddler post for another fun-filled activity.